Warning: Use of undefined constant POW_OPT_NAME - assumed 'POW_OPT_NAME' (this will throw an Error in a future version of PHP) in /homepages/43/d409135184/htdocs/murdersville/museum/wp-content/plugins/posts-order-widget/taxonomy.class.php on line 188
 Sir Francis Drake | Little Storping Museum

A couple of different versions of the Sir Frances Drake theme were put out as singles. The first released in 1961, was by Ivor Slaney and his Orchestra on HMV (45-POP 943). The B side was a Slaney composed track called Midsummer madness.

The second was on the Piccadilly label in 1961 (7N.35013) was by the Piccadilly Strings and featured the theme for the series Our House as the reverse.

Set of trading cards issued by A&BC gum in the UK. 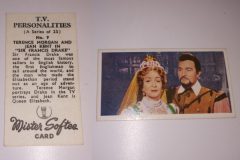